Nico: You Are Beautiful and You Are Alon

'Here is the Odyssey of Nico . .
. a scholarly and detailed chronicle of this brilliant artist, who was spurned and tortured for her trouble.'IGGY POP'At last, a comprehensive and compelling book about Nico.'VIV ALBERTINE'[A] fantastic book.'COSEY FANNI TUTTI'A gripping portrait.' THE TIMES'Absorbs from start to finish.' OBSERVER'[This] book gets closer to understanding Nico than most.' GUARDIAN'Entertainingly written and insightful.' INDEPENDENT'Detailed and sympathetic.' EVENING STANDARD'Expansive.' UNCUT'Compassionate.' MOJO'The best music book you will read this year.' LOUDER THAN WARThe real story of Nico is one of determination, self-destruction and belief in one's artistic vision, at any cost. Nico was an ever-evolving myth, an enigma that escaped definition.
Born Christa Paffgen, Nico grew up in war-torn Berlin before being scouted by a fashion photographer in her early teens. At age twenty-seven, she became Andy Warhol's newest Superstar, securing the position of chanteuse for the Velvet Underground. Though she is primarily remembered for contributions to their seminal debut album - and her relationships with Brian Jones, Bob Dylan and Jim Morrison - her own artistry and influence have often been overlooked.
Nico spent most of her career as a solo artist on the road, enduring empty concert halls, abusive fans and the perilous reality of being a drug addict. Yet beneath the superficial denigrations and one-dimensional myths was a complicated visionary determined to make art that was truly her own. In You Are Beautiful and You Are Alone, defying the sexist casting of her life as the tragedy of a beautiful woman losing her looks, youth and fame, Jennifer Otter Bickerdike cements Nico's legacy as one of the most vital artists of her time, inspiring a generation of luminaries including Bjoerk, Morrissey and Iggy Pop.
Containing over a hundred new interviews and rare archival material, this is an empowering reappraisal of an underappreciated icon. 'The book that Nico's real devotees have been waiting for, and this unique lady has long deserved, deserves to sit with the great biographies.'RECORD COLLECTOR (*****)'Scrapes away decades of "misogyny and stereotyping" to reveal something of the woman behind the cheekbones . .
. Bickerdike battles hard to bring light to the darker corners of Nico's story; she busts myths, tracks down documents and tries to explain the singer's motivations.'UNCUT'Riveting.' BARNEY HOSKYNS'Extraordinary.' GILLIAN McCAIN'Vivid, moving, unsettling.' LUCY O'BRIEN'What a treasure this book is.' DANNY FIELDS 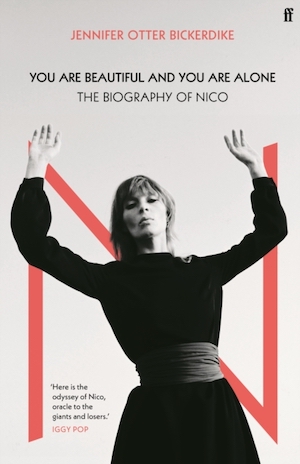