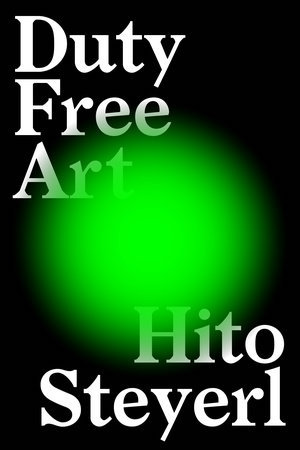 One of the many positives of working in a bookshop is that I occasionally get advance copies of new books, page proofs, to give them the book trades insider jargon. Usually they arrive as a paperback version of what will be released as a hardback a few months down the line. Annoyingly, for, pedant that I am, these books actually feel like bastardised versions – knock-offs of the genuine article: the publication ‘hacked’; “Uncorrected Page Proofs” blazoned across the cover image; the publishers’ logo not-quite fitting on the spine – I could go on but I won’t.

One such book is Hito Steyerl’s forthcoming collection of essays Duty Free Art to be published by Verso later this year. And like my proof copy her writing addresses everything hacked in this world, or how the world is hacked and how the hacked world informs her understanding of visual culture.

Her subject matter reminds me of reading Paul Virilio, particularly War and Cinema, and Pure War but this isn’t to say her writing is at all derivative – more that she like Virilio, is able to take the technologies of war, information and media, and apply them to visual arts culture. Steyerl writes snappily and immersively – the reader is there with her as she data-mines WikiLeaks; the War on Terror; tax avoidance and what she terms Freeport art storage and impossibly wealthy art collections; Smartphones and Big Data.

Duty Free Art is not a detailed analysis of new technologies, nor is it dry and academic, and it is all the better for it in my opinion; I feel that by the time Steyerl had had the time to research it to the hilt the technologies she investigates would have moved on. What we have in her book is a compelling critique of the media-world today, a rich, idea-filled, collection of texts that will engage anyone interested in contemporary visual culture.