The Mushroom at the End of the World: On the Possibility of Life in Capitalist Ruins by Anna Lowenhaupt Tsing 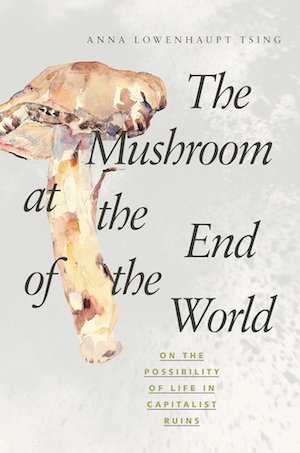 In Marx's critique of political economy and subsequent Marxian analyses, the capitalist mode of production refers to the systems of organizing production and distribution within capitalist societies. Anna Lowenhaupt Tsing is an American professor of anthropology whose research in the fields of humanities, natural and social sciences has led her to write on shamanism, politics and ethnography. Her recent book The Mushroom at the End of the World, now new in paperback, takes the research findings of Tsing’s investigation into the commercial picking, and distribution to market, of mushrooms and relates this supply chain to the wider, global, economic and social situation we find ourselves in the early 21st century. Tsing’s book focuses on the matsutake mushroom: very valuable and highly prized in Japan, yet, now found outside of the far east in the US, where it is picked and shipped to Asia. So far so good, this could easily be a somewhat dry, academic case study utilising the export of mushrooms, to reveal underlying trends in global capital. In many ways the book does exactly that, and it being published by a US university press rightly points to the fact that the book arises out of academic research. The tone of her writing however, is not at all bland; it’s as though, along her way, writing her story, Tsing has fallen out of love with the university and moved in with the human beings sharing the centre of the story.

Tsing’s initial heartfelt assessment of the global economic situation will no doubt strike a chord: ‘The economy is no longer a source of growth or optimism; any of our jobs could disappear with the next economic crisis. […] I find myself without the handrails of stories that tell where everyone is going and, also, why […]I find myself surrounded by patchiness, that is, a mosaic of open-ended assemblages of entangled ways of life, with each further opening into a mosaic of temporal rhythms and spatial arcs […] an appreciation of current precarity as an earthwide condition allows us to notice this-the situation of our world.’ She continues ‘…we imagine such precarity to be an exception to how the world works. It’s what “drops out” from the system. What if, as I’m suggesting, precarity is the condition of our time’.

The matsutake mushroom is the basis and focus of this story and Tsing, early on provides a poignant visual image; astoundingly, it is said that matsutake were the first living organism to emerge from the devastation of the Hiroshima bomb, and this depiction is something of a theme for this book: damage. Impaired humans, people broken and dislocated, primarily by war; ‘survivalists’ hiding in the hills, American ex-servicemen, survivors of the Vietnam war uncomfortable in the mainstream of society, living a life ‘off-grid’ in the Cascade mountains of Oregon. Lao, Thai and Vietnamese refugees and migrants with ‘neither money nor western education’ using the skills honed in Indochinese wars to survive in the public/private swathes of industrialised and ravaged forests. Tsing’s analysis rightly revolves around people, the effect on lives through industrialised processes, changing landscapes. There is science too, Tsing’s writing masterfully brings to life the mushrooms symbiotic relationship with its environment. Through it all Tsing allows the matsutake, the mushroom to lead the story

Tsing’s analysis of the precarious nature of life and the reality for many people around whom this book is written is also the story of the mushroom of the book: Matsutake are not cultivated, but collected: they tend to occur ‘naturally’ in forests and woodland where there is a history of human intervention or even, devastation. Although there is pattern to the dispersal of matsutake, they are notoriously hard to find. This scarcity makes the matsutake valuable, but the difficulty of collecting them makes for the fascinating story; somehow, she manages to turn these humble fungi into a presence, a deity even, weaving the story and revealing wonderful, redeeming and healing possibilities for all our futures in a precarious present. Her writing criss-crosses the history and science of the matsutake whilst suggesting how it’s relation to our human story might offer scenarios and solutions to our troubled relationship with our environment.